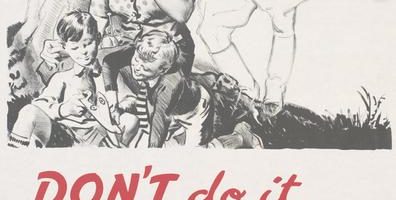 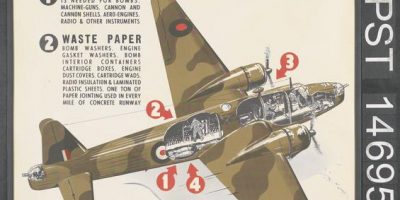 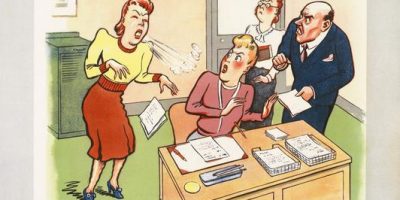 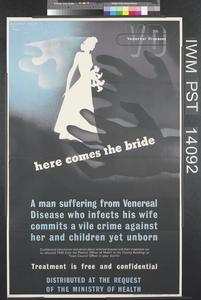 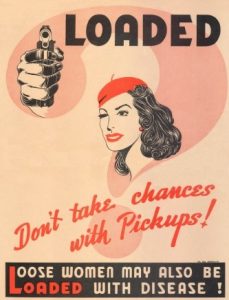 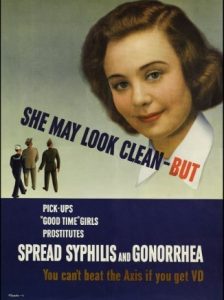 She May Look Clean – But 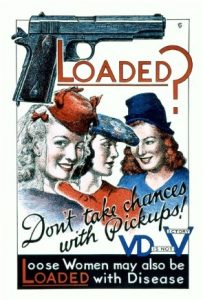 Loose Women may also be LOADED with Disease

We can see through these posters how the anti-venereal disease campaign encompassed both the home and war front. “Here Comes the Bride” represented the home front, encouraging men not to transmit their disease to their wives. But the anti-prostitution propaganda with the three posters above represent the war front fight against venereal disease, encouraging men not to be tempted by prostitutes. The posters all feature respectable looking women but are simultaneously deterring men from falling for them for the sake of his family waiting on the home front. And due to the harm caused by venereal disease during the first world war, it makes sense that there would be these campaigns to prevent the same mistake from occurring during World War II, thus we have anti-prostitution posters, and, on the opposite end, “Here Comes the Bride.” 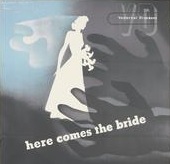 Here Comes the Bride (Upper Half)

The poster features the white silhouette of a bride with black, shadowy hands reaching towards her. The contrast between white and black is present here, as the white outline of the bride symbolizes virginity and purity, while the giant black hands reaching for her symbolize corruption, perhaps through immoral contraction of disease, and the spread of the disease from her husband. While we do see the vilifying of men who contract venereal disease, there is also clear encouragement for them to seek treatment.

Here Comes the Bride (Lower Half)

In small print on the lower-half of the poster, it says, “Confidential information and advice about venereal diseases and their treatment can be obtained FREE from the Medical Officer of Health.” Namely, the appeal to seeking treatment would be free information and advice, while also being confidential. There would be, as advertised here, no reason not to seek some form of consultation as, also presented in the poster, there are serious consequences. An added layer of terror around the poster is the new bride’s pregnancy. If the husband does not seek treatment, he would be endangering not only his wife, but also his unborn children.

The propaganda concept surrounding venereal disease and the family life is not exclusive to just “Here Comes the Bride.” According to the UK National Archives (available here), the designer of this poster, Reginald Mount, joined the Ministry of Information in the beginning of World War II and became prominent for his anti-venereal disease campaign that ran from 1943 to 1944, meaning that “Here Comes the Bride” and “Tomorrow’s Citizen” (below) were published during that interval. As the Ministry of Health was focused on providing care, treatment, and health information to the British public, the enlistment of a propaganda designer like Mount was necessary in providing the alternative to the typical means of sharing information, resorting to scare tactics. All of the posters I have provided in this blog are meant to scare the public and make them fear the threat of venereal disease. 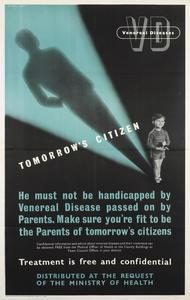 Here we have a very similar piece of propaganda designed by Reginald Mount and serving the same purpose as “Here Comes the Bride.” This poster again contrasts dark and light but instead focusing exclusively on a child infected with disease because of his parents. The young boy’s shadow depicts the silhouette of a much older man, signifying the boy’s maturity and the fact that he will carry venereal disease throughout his entire life.

I imagine that these particular pieces of propaganda were very effective. The trend we see is that the man actually infected by the disease and carrying it on is never actually shown even though the propaganda is designed for the male audience. The propaganda was likely meant to invoke a sense of fear in men as we see the detrimental effects of disease on his family. The disease contracted by the husband infects the people he cherishes most in the world, his wife and child, both innocent and vulnerable, for the purpose of scaring him into avoiding prostitutes and, if infected, getting treatment.