This recipe came from the Recipes Past and Present’s website. The recipes that are written on this website mention a variety of food recipes for instance, cheese, deserts, drinks etc. The recipes listed had been consumed during World War II (1939-1945). The recipes require portions due to the limited supplies the people had. The British had a ration book for all sorts of food for instance, bacon and ham. Beside food being portioned, it was also portioned between an adult and a child.

Step 1: I cut the potato’s in half. This will help reduce the time it takes for the potato to soften.

Step 2: I put water in a pot and waited for the water to make bubbles.

Step 3: Than, put the potato’s in the hot water to boil.

Step 4: Waited for the potatoes to soften, took about 30 minutes on high heat.

Step 5: I mashed the potato’s using a potato masher. You want to make sure that the potatoes are well mashed and has a thick, smooth consistency. (This was the hardest part because my hand started hurting.)

Step 6: Mix the flour with the salt.

Step 7: Rub in the fat and work into the potato.

Step 8: Mix to a very dry dough with a small quantity of cold water.

Step 9: Knead with the fingers and roll out.

Step 10: After rolling out using a prep board and rolling pin. I folded the pastry in a roll.

Step 12: I used a pan to fry them with very little fat.

The cooking process was easy enough; however, there was some confusion. A lot steps have been left out and this might be because these recipes were made multiple times during the war period. The British people must have cooked food without having to look at the recipie.  Boiling and baking was a huge part of cooking the food during the war. The recipe does not mention wither to boil the potatoes or to peel the skin. I had to use my common sense and assume it was required since it was not written down in the steps. I peeled the skin but later learned that the skin of the potato has a lot of health benefits. I automatically regretted peeling it off because I realized during the WWII period they would have kept it to gain all the vitamins. For my preference I do not like the skin therefore, I peeled it. 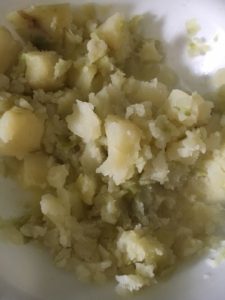 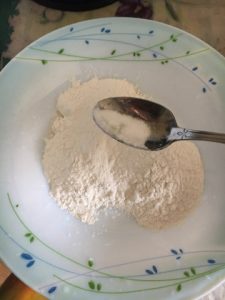 I chose this recipe because I like potato’s and it is considered a fulling food. I also wanted to see how long I could stay full from eating the pastry’s. My hypothesis came from the fact that I assumed food was rationed and the people during the war had less meals.

I used two potato’s. I had not expected the recipe to produce a large quantity from just two potato’s. The food portions during that time was controlled by the Ministry of Food. The Ministry of Food’s goal was to serve food that was healthy, keep the population fed, and potato’s did just that. All  of the ingredients that were being incorporated were grown on British land. The way I view the ingredients listed had to do with pride. This war was all about Nationalism and since potato’s were grown on the homeland they took advantage of that.  Also, because of the war they were not able to import or even export goods. Thus, resulted on limited supplies of food. 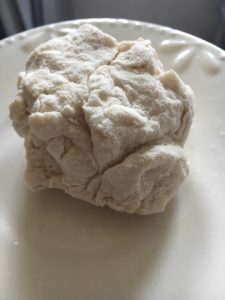 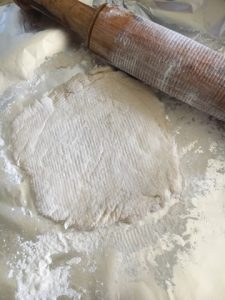 A small amount of dough increases once you roll it out. I kept rolling the dough to make it very thin. 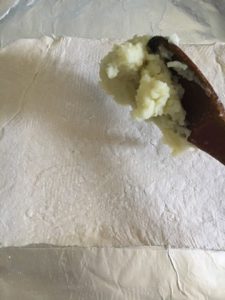 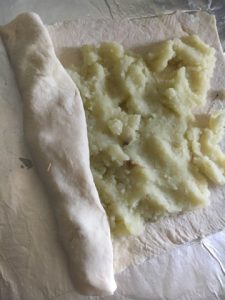 I had left over dough and potato. This allowed me to make another batch of these pastry’s. 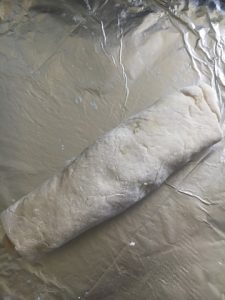 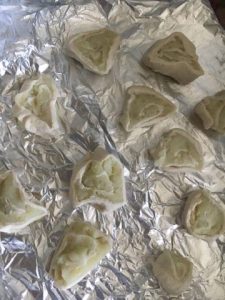 There was not much flavor that needed to be added to the recipe. Salt and potato works to satisfy the taste bud. 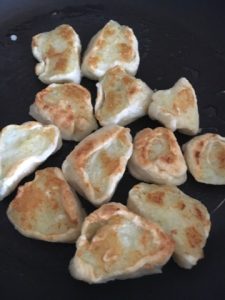 Fats were limited as well. I used less than half a spoon of oil to fry the Potato Pastry’s. The dough quickly absorbed the fat. I cooked it on high heat because I thought during the war period the cooks would have been limited on time because in class we had saw a video of how during the day people had jobs, a life, and other things to attend. I covered the pastry’s with a lid so they heat would circulate and keep it warm on the inside and fully cook. 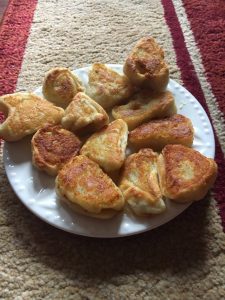 I am honestly surprised it came out really good. My brothers at a point came into the kitchen and asked me if I was making French fries. My brothers ate the pastry’s with ketchup. It was quick, simple ingredients and fulling; however, very tasty. One of the thoughts I had on mind before making the recipe was to see how long my stomach would stay full. I had these Pastry’s at 11 in the morning. Around 4 in the afternoon I was hungry. It took five hours which is the normal amount of time that it takes for me to be hungry again.  The dough was crunchy but the potato was soft and literally melts in your mouth. I struggled with cutting the dough because it was too soft. I realized my problem was that I made the dough and used it right away instead of leaving it in the refrigerator to harden a bit.  It ruined the shape of the roll hence the weird shapes. I would defiantly make this again. It had been a unique experience and an excuse to cook/bake.