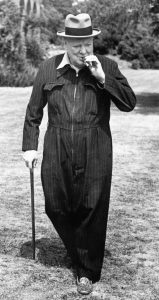 During World War II, Winston Churchill had his siren suits tailored by his shirtmaker, Turnbull & Asser, and as such, the dress company has well-documented articles (one of many linked here) detailing their professional relationship with the British Prime Minister. According to the article linked above, Churchill likely got the idea for the siren suit while watching bricklayers on his Chartwell Estate. Admittedly, the siren suit was not entirely Churchill’s idea, but rather a redesign of the “boiler suit” which came into creation during the late 19th century. This was during the Victorian steam era and coal-fired boilers required regular maintenance. Turnbull & Asser say that such a dirty job warranted a “long-sleeved, high-necked one-piece garment to stop grime and dust.” Eventually, such a convenient suit was adapted into other professions, mainly factory jobs, but also by bricklayers where Churchill likely got his inspiration for reinvention.

Following a similar path as the boiler suit, siren suits were convenient attire for World War II. They were loose-fitting and comfortable with pleats for easy movement. They also had large and accessible pockets, and were secure with belts and zippers. Churchill originally did not directly associate the siren suit with German air raids and, instead, called them “romper suits.” Churchill wore his romper suits regularly and after the British public caught on, they associated the suit with German air raids because of how easy they were to put on over everyday clothes and how comfortable they were when hiding in air raid shelters. The suits were, of course, eventually tailored towards women and children once they became known for their convenience during air raids. 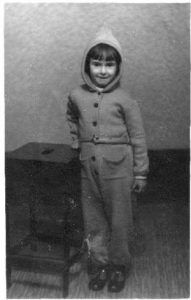 Julie Allen wearing her siren suit as a child

“Fond Memories of the Siren Suit by a Child in Penge,” an article by Julie Allen and archived by the BBC (available here), tells the story of Allen when she was a child during the air raids. Regarding her siren suit, she writes, “It was always ready for me to quickly slip on over my pyjamas so that we could get down to the shelter as quickly as possible. They also had hoods to keep your head warm. I really liked mine and it was all fleecy inside with buttons down the front.” We can, of course, see a disconnect between the styles of the siren suit between adults and children. For Allen, style was not a necessity as she was just a child. The suit was therefore tailored to the comfort level necessary for a child seeking shelter during an air raid. 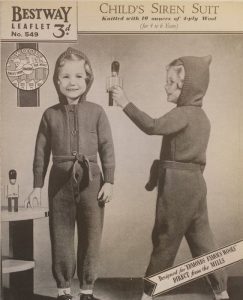 In the above image, we can clearly see how the marketing for siren suits towards children contradicted the design and intention for the suit. At the very top it says “Knitted with 10 ounces of 4-ply wool.” As we will see again below with a different advertisement tailored towards women, there is no direct mention at all of the suit being used as protection against air raids. The suit is instead marketed simply as a comfortable onesie for children. The child in this advertisement is smiling and playing with his toy. There is no direct indication that he is preparing for or being sheltered from a German air raid.

Siren suit marketing for adult women differed from marketing towards children even though they held key similarities. As we previously saw with the outfits designed for Winston Churchill, the comfort aspect of the suit was not a significant sell, but rather marketing emphasized the suit as a fashion statement. 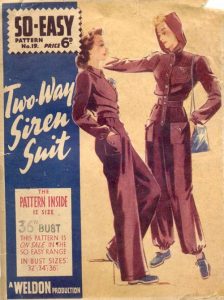 Just like Winston Churchill’s custom tailored siren suits from Turnbull & Asser, there was a market for fashionable siren suits designed for women. The article from Turnbull & Asser previously linked mentions that women would often wear siren suits to protect their modesty. This provided a specific use outside of preparation for the German air raids. The advertisement above exemplifies this point. Women are depicted as wearing highly fashionable siren suits but are not running to or hiding in an air raid shelter. The woman on the right even wears the hood over her hair and hangs her purse over her shoulder to compliment the look of the siren suit. What is, after all, most peculiar about this advertisement, as also represented in the advertisement for children, is that the siren suit is not marketed at all for its air raid protection, but rather as an innocent fashion statement.

While the siren suit held its primary use of air raid protection throughout World War II, I can see why it was marketed as fashion in conjunction with its primary purpose. Britain constantly had to be aware of the impending threat of air raids from the Germans. And wearing dresses or professional clothing while in an air raid shelter may not have been very practical. The siren suit became a necessity for many due to its convenience and availability. Thus it is only natural that if an article of clothing was to be a necessity, people would seek out ways to make it fashionable. The concept is applicable to any number of necessities like glasses or even shoes. The difference here, and what brings up an interesting perspective, is that the popularization of the siren suit was actually a form of normalizing war. We saw that the advertisements tailored towards women and children contained no hints that the suit was meant for the purpose of war. Women and children wore the suits for fashion and comfort respectively while simultaneously using the same suits as protection against the German air raids.