During the second world war, rationing was a very important way to make things last. Civilians rationed, food, makeup and even clothes. While there wasn’t much change to men’s fashion, which included a hat and a suit as everyday wear, fashion still played a big role in the lives of women as they were always encouraged to look their best and keep up appearances as a way to boost morale. If a person showed any lack of interest in their personal appearance, it was a sign of low morale and everyone had to be on the same page since it was a “peoples war” at the end of the day.
On June 1, 1941, clothes rationing was introduced by Oliver Lyttleton, President of the Board of Trade, using books known as clothes “ration books”. The important point of rationing clothes was to make sure that what they already owned lasted longer, that way the government could reduce production and keep raw materials safe. Rationing not only kept the demand for raw materials at a low, but it also meant equal distribution and availability in clothing stores.

Limiting the use of raw materials meant everything had to be minimalized, hence a simple yet fashionable style: 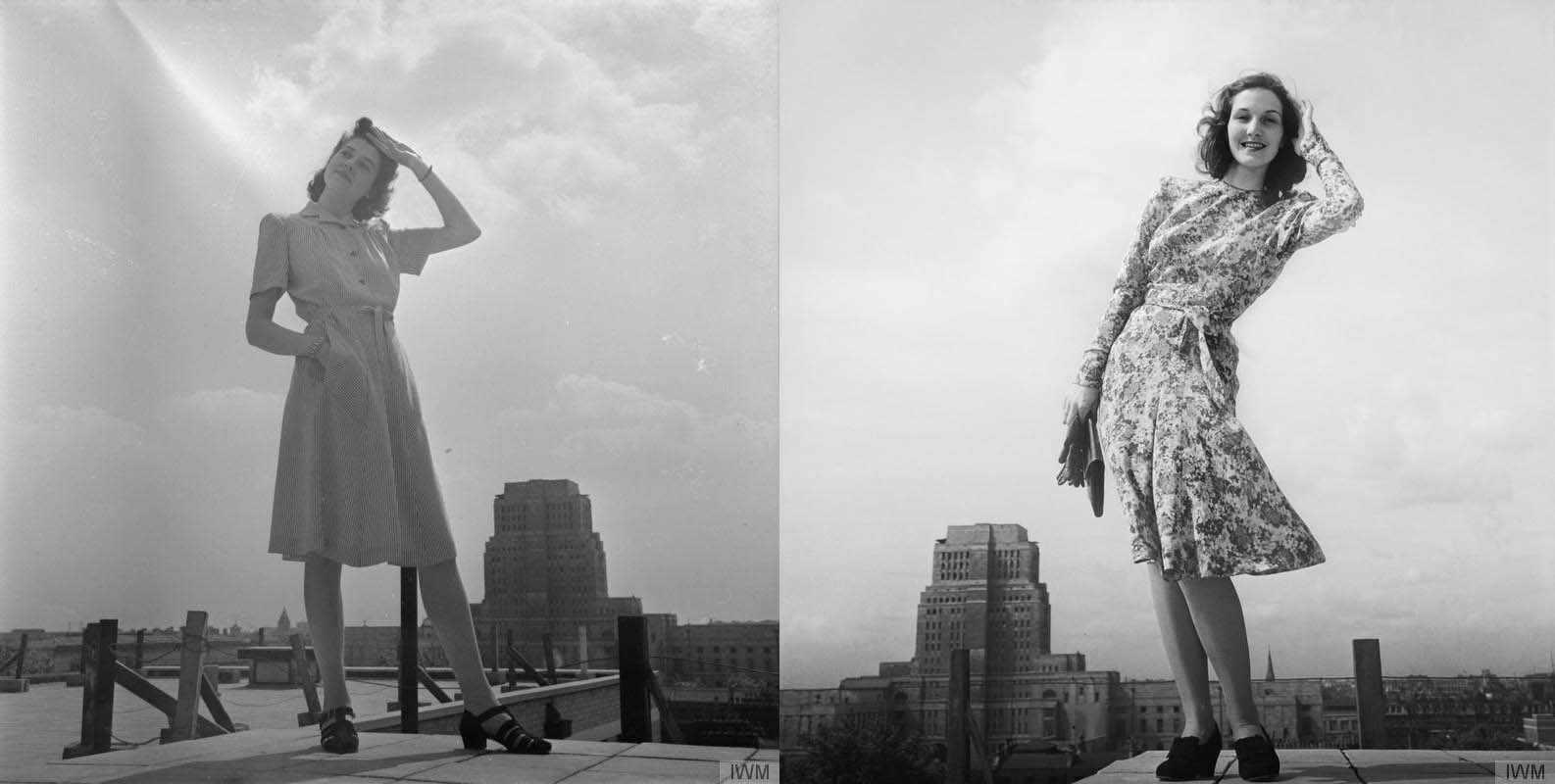 * The clothing on the models pictured above show minimal pleating, minimal pockets and minimal buttons*.

Clothes rationing was a lot like recycling since the goal was to convert one article of clothing into a different style while keeping the same material, therefore there was no disruption to the raw materials which were much more needed for the War. One famous campaign that came out of this was the “Make Do and Mend” campaign (pictured below). 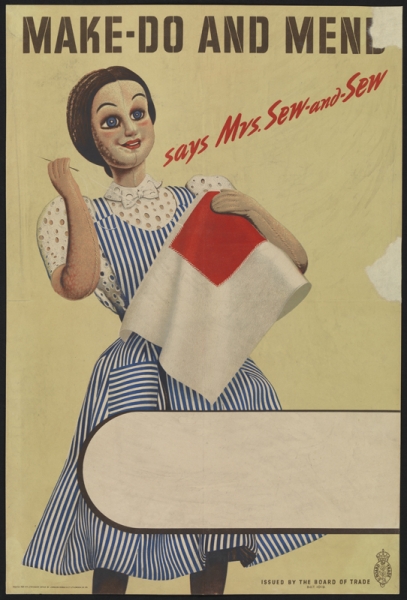 *Pictured above is the character Mrs. Sew and Sew encouraging women to mend the clothes that they already owned*.

The “Make Do and Mend”  campaign was issued by the Ministry of Information and it began with a pamphlet that advised housewives on how to be sparing yet fashionable.

One example of this sparing fashion is shown in the picture below: 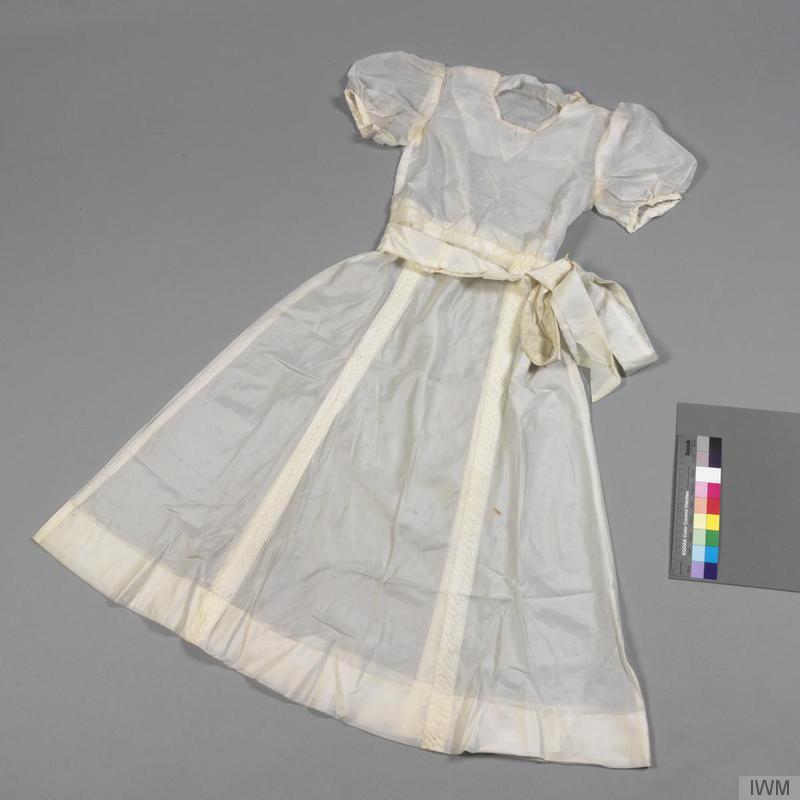 The war certainly played its role in the manufacturing of clothes, in which there was a lot of pressure put on the manufacturing process. One category of clothes that this involved was utility clothes. Utility clothes, especially the much adored WRNS (Women’s Royal Naval Service) outfit boosted recruitment due to its stylishness. Though the service was small, it was the one most joined, compared to the khaki uniforms worn by women’s branch of the army, the ATS (Auxiliary Territorial Service). These types of fashion related rivalries existed between men that served as well, but to a greater intensity. For example, The soldiers in the army had simple khaki uniforms (also known as battledress) that didn’t show off their shirt and tie while the men of the RAF (Royal Air Force) had a very neat blazer that showed off the shirt and tie and looked more appealing overall.  The soldiers were referred to as the “brown jobs” due to their grim uniform and the RAF men were referred to as “Brylcreem Boys” due to their heavy use of the hair product, which made them seem obsessed with their appearances. 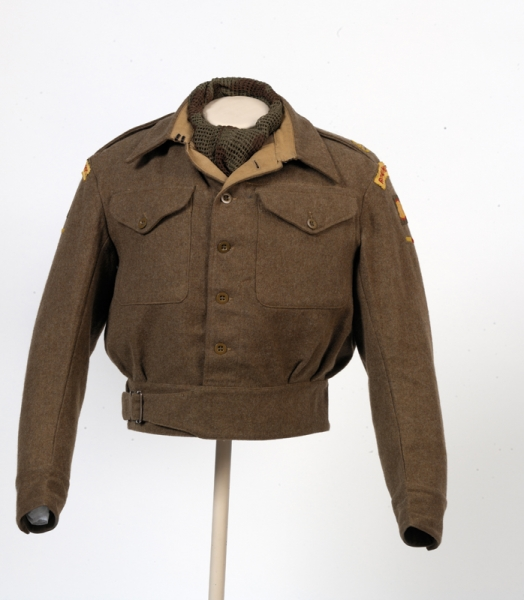 *Pictured above is a British 1940 pattern Battledress blouse”

“By 1940, ‘Battledress’ had become the standard field uniform for the Army, replacing the earlier service dress. The 1940 pattern battledress (blouse pictured here) was sometimes referred to as the ‘utility pattern’ as its design had been modified to make it more efficient to produce. The concealed buttons of the fly front, cuffs and pockets were replaced by exposed buttons and the pleats on the breast pockets were removed”. ( Excerpt from the iwm.org.uk).

Richard Moss, 16-08-16 Article. “Fashion on the Ration: The story of clothing on the home front during World War Two.” Museum Crush, museumcrush.org/fashion-on-the-ration-the-story-of-clothing-on-the-home-front-during-world-war-two/.